Between 1920 and 1924 golf was played on an area then used for grazing dairy cattle known as “Brown’s Orchard”, which included portions of the present first six holes. In 1924 a company registered as Pymble Golf Club Ltd was formed with the object of taking over from the Golf Links Estate an area of 90 acres to form a Golf Club to be known as Pymble Golf Club and to erect a Club House, build an 18 hole golf course, bowling green etc. A prospectus issued in 1924 showed the layout of an 18 hole course designed by Dan Soutar and Carnegie Clark. Preparation of the course continued during 1925 with the laying of water to greens and the provision of a temporary Club House. The Golf Club was officially opened on 20 February 1926 at a ceremony attended by “700 prominent citizens”. After the official opening an exhibition match was played between leading Professionals Will Corry and Tom Howard.

The first Committee of ten under the chairmanship of Dr PC Charlton was elected at the first general meeting on 16 March 1926. Many cows and a large bull roamed the fairways and the greens were fenced so that players could make a hurried retreat if necessary. In fact, one of the first resolutions of the newly formed Committee was that the bull was not allowed on the course in future. 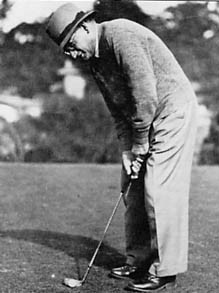 The full 18 holes were officially opened on 31 March 1928, when the membership totalled 625 and the late Tom Popplewell was appointed Professional. In October 1932 the Club was amalgamated with the Hunters Hill Golf Club, which changed its name to the “Pymble Golf Club” so as to effect the transfer of its liquor licence. Prior to this Pymble members kept their necessary liquor supplies in “Liquor Lockers”

In 1940 the Members’ Lounge Bar was constructed and it was one of the first bars set up by a metropolitan club where members could relax in golfing gear and spikes. In the same year the first dam was built to provide a supplementary water supply for the course.

The Club purchased 20 acres of land known as “Britton’s Orchard” for the sum of 7000 pounds. This comprised all of the land north of the Pin Oaks to the left of the 13th fairway and now includes the 9th, 10th and 14th and part of the 11th, 13th, 15th and 16th holes. It was then possible to redesign the course to eliminate the three holes in the 10 acre “Paddock” on the southern side of Pentecost Avenue. In 1949 Eric Apperly’s plan for the new layout was adopted and the work was completed in 1953.

The surplus “Paddock” land was sold to Ku-ring-gai Council for 10000 pounds and most of the land fronting Merrivale Lane was auctioned in 1953, realising about 23000 pounds. The area of the remaining land was a little over 100 acres. Since that time constant course and clubhouse improvement has seen Pymble develop into one of Sydney’s most beautiful and challenging courses. The establishment of kikuyu fairways and hybrid bent in greens was accompanied by the planting of over 2000 trees and shrubs.

An automatic sprinkler system for tees and greens was completed in 1977 and subsequently has been upgraded to a fully computerised system covering most of the course. Additional dams were constructed, mounds were built and large trees were planted.

In January 1991 a storm wrecked in thirteen minutes what had taken generations to achieve. The damage to the course was hard to imagine with trees devastated and tees and greens severely damaged. Although the Club House was not devastated, many windows were broken and carpets and ceilings suffered water damage. A major tree planting program was commenced to replace the large number of substantial trees destroyed in the storm. The program has focused on adding many native and colorful trees to further improve the beauty of the course.

The course is known for its many ducks and geese that frequent the 16th hole dam area. In addition rainbow lorrikeets, eastern and crimson rosellas, king parrots, kookaburras, magpies, plovers and many other varieties are common. Unfortunately sulphur crested cockatoos and corellas are regular visitors and these protected birds cause much damage to the greens and other parts of the course. 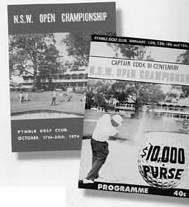 Pymble has a strong competitive background and in recent years has won the Major, Master and Junior Pennants as well as the Eric Apperly Shield. Successful professionals Rodger Davis, Lucas Parsons, Peter O’Malley and Craig Warren began their careers as amateurs at Pymble. Outstanding Pymble Members who have represented Australia include Bob Stevens, Kevin Donohoe and Tony Dight. Kel Nagle was appointed to the position of Club Professional in 1951 and remained in this position for five years before resigning to become a full-time tournament professional. He won the British Centenary Open in 1960 capping off his career as a fine player and a wonderful ambassador for Australia.